Rebelle Rally competitors were awoken at 5 AM by the sound of rally founder Emily Miller and her now famous cowbell.  Spending a chilly night in cowboy country at Gold Point, Nevada, it was more appropriate than ever.  The first scored day of competition got serious in a hurry, with roads criss-crossing from Gold Point in all directions.  The course led teams through Eureka Valley at the northern end of Death Valley National Park, which they crossed with roadbooks as part of a Rebelle Enduro Challenge.  Stunning views greeted the competitors as they descended to Crankshaft Junction before returning to Gold Point and making another loop to the north of town to round out the day.  The Base Camp at Gold Point contains a remote fueling truck, repair station, mobile showers and bathrooms, as well as a dinner prepared by Michelin star chef Drew Deckman. The first stage in the 4x4 Class was won by Team Xelles - #190.  Rachelle Croft and Taylor Pawley in their Bone Stock Lexus GX460 sit six points ahead of Team Roads Less Travelled - #154.  The top scoring rookies were software engineers April Leone and Joanna Chen (Team Luna - #107) in their Total Chaos-equipped Toyota 4Runner.  Four-time Rebelles Emme Hall and Rebecca Donaghe of Team Jeeves - Team #200 currently lead the Crossover Class in their 2019 Rolls Royce Cullinan, proving that the Cullinan is just as capable as it is luxurious.  Rachael Ridenour and Karah Behrend of Team Record The Journey - #207 are currently second in the Crossover Class in their Mitsubishi Eclipse Cross. The Crossover Class boasts twice as many competitors in 2019 than last year, ensuring a battle that will play out over the next seven days of competition.  Both the 4x4 and Crossover classes serve as the ultimate proving ground for both vehicle manufacturers and aftermarket parts builders as well.

Team Fast N’ Curious- #145 is the first off the line for Day 2. The competition is certain to become even more intense tomorrow as the course covers 390 kilometers of extremely diverse landscape and locations. Straight off the start is a Rebelle Enduro Challenge to a Green CP with a jaw dropping view, and the Enduro ends just in time for competitors to soak it all in. From there the route will drop down to Beatty and on to Amargosa Dune, otherwise known as Big Dune, for the first sand of the rally. From there teams return to Death Valley National Park, passing Stovepipe Wells and traversing Wildrose Canyon. Then it is on to the ghost town of Ballarat and the impressive Trona Pinnacles before ending at Spangler Open OHV Area, one of four new OHV areas scheduled for the 2019 Rebelle Rally. Daily Tech Tip- What Is A Rebelle Enduro Challenge (REC)?
RECs are precision driving sections that involve a set route with an assigned start time and assigned target average speed through the route.  Participants use a roadbook common to rally raid events, such as Dakar, to navigate to the next Green CP while trying to maintain a designated average speed. The goal of competitors is to follow the route and maintain assigned target speeds as closely as possible, points are awarded for being “on time” at each time control. Learn more about RECs here. AIRAID is a name synonymous with power and performance for their lineup of well-crafted, dependable  air intake products for anyone’s “third teammate” – their vehicle. While the company may have a new look, their washable, reusable products retain the same reliability and steadfast improvement in performance that they have been known for over the past twenty years. The mission of AIRAID and their commitment to possibilities in off-road adventure, sport and beyond, align with the rally’s core concept of pushing limits. To that end, AIRAID fielded a Jeep Wrangler with two of their employees, Ashley Drlicka & Ashley Lopez, as Team Airaid - #127.

“We believe in everything the Rebelle stands for. It is a top-notch competition that provides a platform for our products to be put to the ultimate test. It’s the perfect combination of performance and adventure showcasing the AIRAID advantage,” said Steven duBois, AIRAID’s Brand Manager. “Like the Rebelle community, we are passionate about exploration. We live to find those paths that often make us feel uncomfortable in unchartered waters, this is when we feel alive the most. It’s called living."

Day 2 was a long one for Rebelle teams, covering 390 kilometers.  The teams departed Gold Point starting at 7 AM on a Rebelle Enduro Challenge before heading to Amargosa Dunes (aka Big Dune) south of Beatty, Nevada.  Many teams spent far too much time in the soft sand, not fully aware of what awaited them in Death Valley National Park and beyond.  The course covered over 100 miles on dirt and went through Death Valley’s Wildrose Canyon before reaching the Trona Pinnacles.  There were numerous blue and black CPs near Trona and the finish line at the Base Camp at Wagon Wheel OHV area, but most teams had to forego these CPs in order to reach the finish before the closing time 11 hours after they began.

Last year’s Rookies of the Year, Team Escape The Paved - #176 edged out Team Xelles - #190 by just one point on their way to the best score of the day in the 4x4 class.  The Xelles’ Rachelle Croft and Taylor Pawley retained their overall lead though ahead of reigning champions Team Clearwater Designs - #100.  In the Crossover Class, Team Dandelion - #202 bested The Naviguessers - #210 on the day, but Team Jeeves - #200 held on to their overall lead in the Crossover class. Many teams struggled with time management on the day, a situation that was not completely unforeseen by Rebelle founder Emily Miller.  “We purposefully made more checkpoints than were possible to force teams to strategize about what CPs they were going to chase and which ones they were going to abandon,” she explained.  “This isn’t something the competitors have seen before, and even women who have done the event for four years struggled today.”  Those struggles are something that will have to be left behind on Day 3.  “There is a reason the windshield is so much larger than the rearview mirror,” mused Tech Director Chris Woo. “You have to look forward, not backward.”

After dinner, Teresa Carrington spoke to the women about her business Ten by Three.  Ten by Three reduces poverty in developing countries by using their unique Prosperity Wages model to pay for artisan products. This innovative financial model creates a cycle of entrepreneur driven growth resulting in permanent financial independence for the artisan.  Teresa shares the ideals of the Rebelle Rally and explained how she has met so many women who have the heart of Rebelles, even if they have never had the opportunity to participate in the rally. The exhausted competitors will be happy to learn that they have only 160 kilometers to cover on Day 3, but it won’t all come easily.  Day 3 is the first half of a marathon stage, starting with a winding Enduro through high desert terrain overlooking the Southern Sierras.  Vehicles in the 4x4 Class will head south into winding canyons, while Crossovers will head into Dove Springs Open OHV.  Dove Springs is a tight canyon with extremely steep, yet short climbs. These trails can be visually intimidating to a person in a stock vehicle, but once examined more closely, most will realize these are absolutely conquerable.  Once leaving this area, they will head north through a thick, impressive Joshua Tree forest before cresting a pass where the Pacific Crest Trail crosses.  Just south of Lake Isabella, the competitors will climb up Piute Mountain to their camping location at the high alpine, private Harrison Ranch. 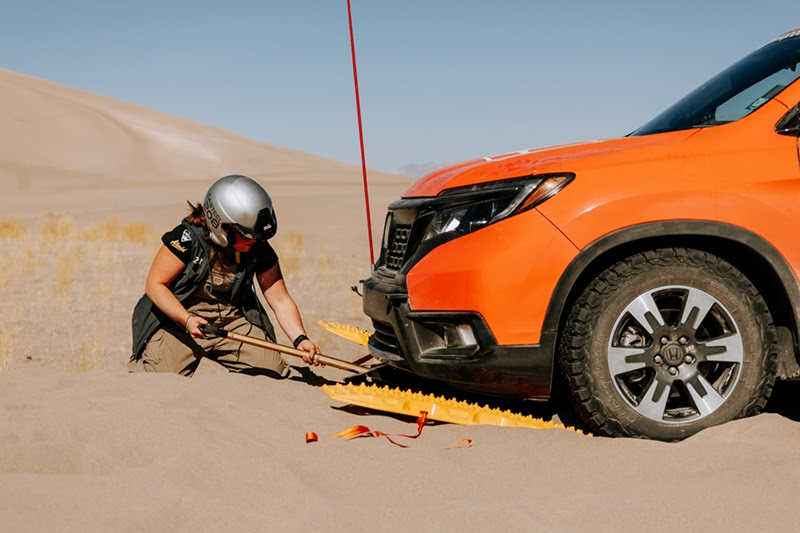 Daily Tech Tip- What Is A Marathon Stage?
A Marathon Stage takes place over multiple days with minimal outside support (only fueling is allowed).  Mountain House freeze dried meals substitute for Drew Deckman's cuisine and there is no mechanic in camp to repair vehicles.  The teams are required to carry all of their own camping gear and cook for themselves, without the luxuries of Base Camp. 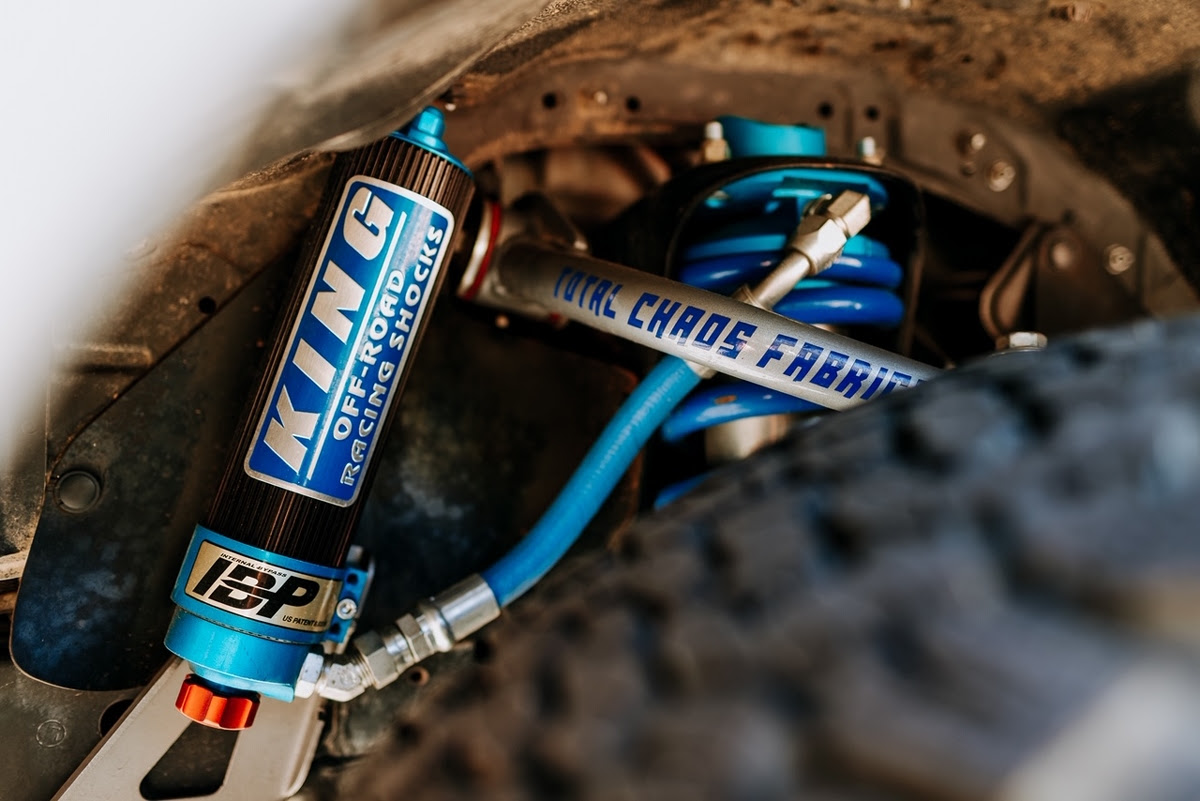 The Rebelle Rally is in a class all on its own as a driving and navigation challenge, so it shouldn’t be surprising that the companies we choose to partner with are just as unique as we are. Case in point: Total Chaos Fabrication. Single-handedly responsible for the “midtravel” suspension segment with their introduction of the tubular Upper Control Arm (UCA) in 2002, Total Chaos Fabrication has been innovating for decades now.  Their control arms use race-quality components to increase wheel travel without the need for custom fabrication.  This year we had more competitors running Total Chaos suspension components than ever, and despite hundreds of miles of punishing terrain none have suffered from a single suspension issue. Total Chaos’ commitment to quality, craftsmanship, customer service, and constant innovation, we are proud to call them the Official Suspension Partner of the 2019 Rebelle Rally.